The Ebonheart Pact is the most unlikely of the three alliances. The Nords and Dark Elves have a long history of conflict, and the Argonians were enslaved by the Dark Elves for thousands of years. It was the Akaviri invasion that forged a bond between them. Now they are determined to control their own destiny by defeating the Empire, while preserving their own fiercely independent homelands. The Nords are the brash, boisterous front line of the Pact; fierce warriors and expert weapon masters. The Dark Elves have a natural affinity for magic. The Argonians are the best guerilla warriors in Tamriel. The combined strength of these unlikely allies makes the Ebonheart Pact a fighting force of extraordinary power. 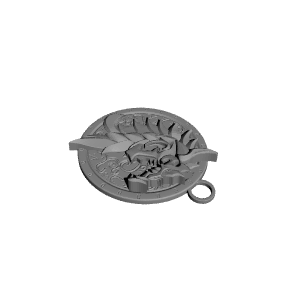 A really neat print output for a highly detailed file, thanks to Pankajj Kumar for sharing this. I printed this at 0.2 mm layer height with 15% infill since I want it to be harder when one tries to squeeze it. Smoothening it looks great but I will soon apply metal coating to it and sand it down to make it look aged and rusty.