3D
Scan The World
2,421 views 176 downloads
1 collection
Community Prints Add your picture
Be the first to share a picture of this printed object
0 comments

In a collaboration between Amnesty International, renowned artist and Mark Wallinger and St. Paul's Cathrdral, this sculpture was created to highlight the plight of those who face torture or execution, or imprisonment for their political, religious, sexual or other beliefs.

Mark Wallinger's 'Ecce Homo', the first sculpture to appear on the fourth plinth in Trafalgar Square, shows Christ as strikingly human and vulnerable. He stansd alone, hands bound behind his back, about to be judged by a hostile crowd.

As the world's largest human rights organisation, Amnesty International works on behalf of people facing injustice, violence and abuse in the darkest corners of the world. With more than 7 million supporters worldwide, Amnesty International are a movement of ordinary people, working to protect the individuals wherever justice, fairness, freedom and truth are denied.

Kate Allen, director of Amnesty, said: "The story of Christ - arrested, tortured and executed for peacefully expressing his opinions and for challenging the authorities of the time - still resonates around the world today. The sculpture is a strikingly vulnerable figure and is representative of the type of cases that we at Amnesty still work on today - the oppressed individual caused to suffer simply for their beliefs.

Find more about Amnesty's work and how to get involved here :- amnesty.org.uk/eccehomo 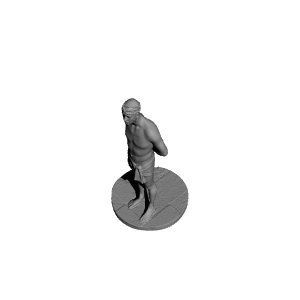