(For the counterpart sculpture, Synagoga can be downloaded here)

This sculpture is part of a sculpture type of two figures known as 'Ecclesia and Synagoga'. Ecclesia and Synagoga is the name given to the symbolic representations in Christian art of the Middle Ages of the victorious Church and defeated Synagogue, symbolizing the triump of Christianity. In sculpture they often appear sculpted as large figures on either side of a church portico, as in this most notable example from Strasbourg Cathedral, though they are well documented in medieval Christian manuscript art. It became a conventional decoration in many medieval churches, especially in France, England and Germany.

The two figures are shown as women, both usually young and attractive; Ecclesia is generally adorned with a crown, chalice and cross-topped staff, looking confidently forward. In contract, Synagoga is blindfolfded and drooping, carrying a broken lance (possibly an allusion to the Holy Lance that stabbed Christ) and the Tablets of the Law or Torah scrolls that may even be slipping from her hand. The staff and spear may have pennants flying from them. In images of the Crucifixion, Ecclesia may hold a chalice that catches the blood spurting from the side of Christ; she often holds the chalice as an attribute in other contexts. Attributes sometimes carried by Synagoga include a sheep or goat or just its head, signifying Old Testament sacrifice, in contrast to Ecclesia's chalice which represents the Christian Eucharist. If not blindfolded, Synagoga usually looks down.

The medieval figures reflect the Christian belief, sometimes called Supersessionism, that Jesus was the Jewish Messiah, and that Judaism as a religion was therefore made unnecessary, by its own tenets, once Christianity was established, and that all Jews should convert. Today opposed by dual-covenant theology, this belief was universal in the medieval church. Synagoga's blindfold reflected the refusal of medieval Jews to "see" this point, which was regarded as stubborn. The Gospel of Matthew (27, 51) related that the Veil of the Temple, covering the entrance to the Holy of Holies, tore at the moment of Christ's death on the cross, which was taken to symbolize the moment of the replacement of Judaism by Christianity as the true religion, hence the presence of the pair in Crucifixion scenes. 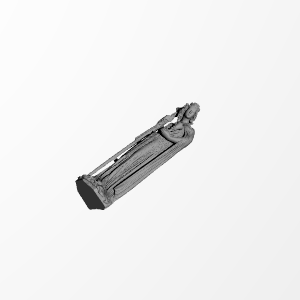 Not very happy about my print. I have troubles with this filament.