3D
Scan The World
2,707 views 82 downloads
Community Prints Add your picture
Be the first to share a picture of this printed object
0 comments

Eduard Pamfil was a doctor psychiatrist and author from Romania. Pamfil attended high school in Geneva and medicine at Cluj. He specialized in neurology in Bucharest, under the guidance of Professor Nicolae Ionescu-Siseşti (1888-1954), and in Paris - an internship prewar neurologist Jean Lhermitte (1877-1959) and psychiatrist Paul Guiraud (1882-1974), and subsequently of- after the Second World War by Henry Ey (1900-1977) Sainte Anne Hospital.  He returned to the country in 1948 and, after a brief period as a civil servant at the Ministry of Health, along with Florica Bagdasar moves in 1950, in Timisoara, where commence psychiatrist, the founder of the discipline of psihatrie of the Faculty of Medicine, Discipline which was established with the coming of Timisoara.

Between 1956-1959 he was a professor at the Faculty of Medicine in Cluj, where he was eliminated as a result of student demonstrations of January 24, 1859, occasioned by the centenary of the Union. Between 1959-1963 was moved to the town of Siret, being responsible for organizing a health and social units for mentally handicapped.Since 1963 he returned to Timisoara, where he remained a professor until his retirement in 1977.  After the death of Edouard Pamfil in 1994 Psychiatric Clinic "Edouard Pamfil" Timisoara was named after him. In the interwar period, Edouard Pamfil was student of the renowned psychiatrist and psychoanalyst Henri Ey in Paris, where he studied guitar classic. Guitar playing with a virtuosity. International Guitar Festival Eduard Pamfil which takes place annually in December was named after him.

Eduard Pamfil was a man of universal culture, considered a true humanist, a great man (Stephen Bertalan), a last-century Renaissance. His work includes graphic artwork. Circle of bionics, organized and hosted him at Timisoara in the years 1970, where they discussed current and new trends in various scientific and cultural disciplines, had a sustained influence on intellectuals who participated, among them artists and literati.

Easy to print, there is no risk to brake any part of product while cleaning supports. Enjoy your printing. 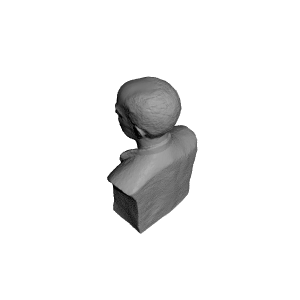 ×
0 collections where you can find Eduard Pamfil in Timisoara, Romania by apllana