3D
Scan The World
6,028 views 707 downloads
2 collections
Community Prints Add your picture
Be the first to share a picture of this printed object
0 comments

The statue of Edward Snowden, called by its creators Prison Ship Martyrs' Monument 2.0, was an ephemeral, illegally-installed public statue of Edward Snowden, an American whistleblower who leaked classified information from the National Security Agency (NSA) and was charged with federal crimes as a result. The bronze-like statue was placed in Fort Greene Park in Fort Greene, Brooklyn, New York City, on April 6, 2015. It was attached to a Doric column on the perimeter of the park's Prison Ship Martyrs' Monument, a memorial and crypt which honors and inters the more than 11,500 American prisoners of war who died in the American Revolution while housed on British prison ships.

Affixed atop an existing column, the statue was mounted by three anonymous artists and their helpers, who were dressed in white construction helmets and reflective vests in imitation of Parks Department workers, early in the morning of April 6, then covered and taken down by NYC Parks officials later that day. A hologram tribute to Snowden was subsequently installed after the statue was removed.

Some characterized the placement of Snowden's statue as an act of vandalism in support of a "traitor," while others disagreed. The statue was up for only 12 to 13 hours before it was covered by blue tarpaulin and bound with rope at 12:30 pm on April 6, 2015, almost immediately after an official discovered it, then taken down an hour later. Calling it an "art prank", investigators from the New York City Police Department's Intelligence Division reportedly gathered DNA and examining other evidence in an attempt to determine the identity of the artist or artists. According to a spokesperson for the New York City Department of Parks and Recreation, "[t]he erection of any unapproved structure or artwork in a city park is illegal." Some passersby were annoyed at the covering of the statue, however. 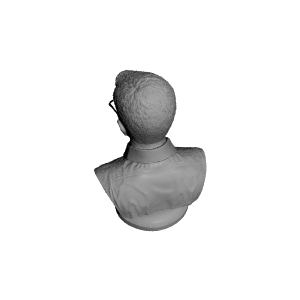 ×
2 collections where you can find Edward Snowden bust in the NYPD 88th Precinct, New York by Scan The World