Effigy of a Knight at the V&A, London

3D
Scan The World
6,181 views 357 downloads
3 collections
Community Prints Add your picture
Be the first to share a picture of this printed object
0 comments

Effigy of a Knight at the V&A, London

×
See your Inbox
×
×
Click & Print preview
18 0 Add to Collection
Description
This tomb effigy represents a fully armoured knight. Several similar tombs still survive in Venice, Verona and Padua. The effigy would have been tilted up on the side closest to the wall, so that it was easier to see from below. The fact that the dead man is represented in full armour as a knight is an indicator of his social role - similar tomb effigies represent people known to have been military leaders or condottiere (mercenaries), like the tomb of Federico da Lavellongo in Padua. It is a rare survival of Venetian sculpture of this sort outside Venice. It is also a good indicator of knightly dress in this period, the armour being rendered quite faithfully.
The recumbent effigy lies on a draped bier. On the head is a bascinet with close-fitting eventail from which hangs a solid nasal. The figure is clad in a jupon, decorated with three chains on the breast, and wears arm-guards and hour-glass gauntlets. The head and feet rest on tasselled cushions.
Gallery location:
Medieval & Renaissance, Room 50a, The Paul and Jill Ruddock Gallery, case FS
This object is part of "Scan The World". Scan the World is a non-profit initiative introduced by MyMiniFactory, through which we are creating a digital archive of fully 3D printable sculptures, artworks and landmarks from across the globe for the public to access for free. Scan the World is an open source, community effort, if you have interesting items around you and would like to contribute, email stw@myminifactory.com to find out how you can help. 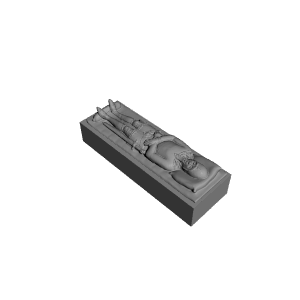 ×
3 collections where you can find Effigy of a Knight at the V&A, London by vam