3D
Scan The World
4,648 views 172 downloads
Community Prints Add your picture
Be the first to share a picture of this printed object
0 comments

This effigy of Don García de Osorio (d. after 1502) is a pendant to that of his wife, Doña María de Perea (d. 1499). Both effigies were originally placed in the church of S. Pedro at Ocaña near Toledo in Spain, but they were removed when the church was declared structurally unsound in 1906. Don García holds a sword (some of which is now missing), and at his feet is a kneeling female figure leaning against a helmet. He wears the shell of the Order of Santiago on his hat; the mantle of the Order is worn over his armour.

The church of S. Pedro was closely associated with the military Order of Santiago, which owned Ocaña. The subject of this effigy, don García Osorio, was a knight of the Order of Santiago, and wears the mantle of the Order, with its badge on his left breast. The distinctive shell of the Order is worn on his woven straw hat. The pommel of the sword is inscribed (in Latin) 'Jesus give me victory', and the hilt, 'The blessing of God'. The church was also used for meetings of the Castilian cortes (a local parliament), and for important ceremonial occasions until the the end of the fifteenth century.

Such an effigy would have also acted as memorial to the family of don García Osorio, and would have been revered by his descendants and local inhabitants. Although the author of the tomb is unknown, he is likely to have been a sculptor active in Toledo, and the skill with which the costume and portraits are rendered on both this effigy and that of doña María Perea (don García Osorio's wife) suggests an experienced Castilian sculptor perhaps influenced by Netherlandish prototypes, in the tradition of Gil de Siloe. 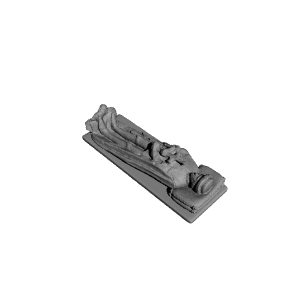