Knight of the de Lucy family

3D
Scan The World
3,342 views 88 downloads
Community Prints Add your picture
Be the first to share a picture of this printed object
0 comments

Knight of the de Lucy family

This tomb effigy was discovered in an underfloor vault during excavations in a chapel space at Lesnes Abbey, Kent. The chapel was probably the site of the Abbey's Lady Chapel, which was built in the 1370s. This effigy is somewhat older than that, and this would explain its unusual placement in an underfloor vault: it was either in an earlier chapel on this site, or was moved here from elsewhere in the abbey.

There is a pike fish (i.e. a luce) scratched into the shield borne by the knight. This may reflect the original decoration of this shield. The pike fish formed part of the arms of the de Lucy family. The family were patrons of the church from its foundation until the Dissolution of the Monasteries. 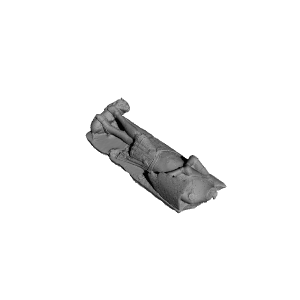