3D
Scan The World
6,864 views 303 downloads
Community Prints Add your picture
Be the first to share a picture of this printed object
0 comments

A false door is an artistic representation of a door which does not function like a real door. They can be carved in a wall or painted on it. They are a common architectural element in the tombs of Ancient Egypt and Pre-Nuragic Sardinia. Later they also occur in Etruscan tombs and in the time of Ancient Rome they were used in both the interiors of houses and tombs.

The Ancient Egyptians believed that the false door was a threshold between the worlds of the living and the dead and through which a deity or the spirit of the deceased could enter and exit.

The false door was usually the focus of a tomb's offering chapel, where family members could place offerings for the deceased on a special offering slab placed in front of the door.

Most false doors are found on the west wall of a funerary chapel or offering chamber because the Ancient Egyptians associated the west with the land of the dead. In many mastabas, both husband and wife buried within have their own false door.

A false door usually is carved from a single block of stone or plank of wood, and it was not meant to function as a normal door. Located in the center of the door is a flat panel, or niche, around which several pairs of door jambsare arranged—some convey the illusion of depth and a series of frames, a foyer, or a passageway. A semi-cylindrical drum, carved directly above the central panel, was used in imitation of the reed-mat that was used to close real doors.

The door is framed with a series of moldings and lintels as well, and an offering scene depicting the deceased in front of a table of offerings usually is carved above the center of the door. Sometimes, the owners of the tomb had statues carved in their image placed into the central niche of the false door. 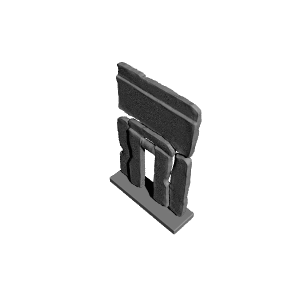 ×
0 collections where you can find Egyptian False Door in The National Art Museum of Copenhagen, Denmark by geoffrey.marchal