3D
Scan The World
3,057 views 104 downloads
Community Prints Add your picture
Be the first to share a picture of this printed object
0 comments

This imposing figure must have guarded the entrance to a sanctuary. The most powerful predator of the steppe bordering the Nile Valley, the lion had been a symbol of royalty since the time of Egypt's earliest rulers (ca. 3200–3100 B.C.). The animal also embodied various important deities, such as Sakhmet, the fiery goddess of war and pestilence, and served as a guardian of temples and palaces.

The sculpture exhibits all the hallmarks of early Old Kingdom art and iconography: the lion's tail is slung high up over the right haunch, the outlines of the ears continue directly into the mane around the face, and the heavy body of the animal is hardly separated from the granite mass of the base. Excavated at Herakleopolis Magna, south of the Fayum oasis, this sculpture is the earliest surviving lion image of monumental size. When found, only the front of the muzzle was missing; it has now been restored. 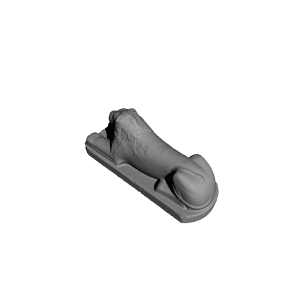