3D
360°
Scan The World
1,244 views 69 downloads
4 collections
Community Prints Add your picture
Be the first to share a picture of this printed object
0 comments

Sarcophagi of this type were first produced in Dynasty 30 and continued to be used well into the Ptolemaic Period. For a related example in Boston, see no. 139 in S. D'Auria, et al., eds., Mummies & Magic: The Funerary Arts of Ancient Egypt.

Míriam Colón was a Puerto Rican-born actress and founder of the El Nuevo Círculo Dramatico theater company in New York. Colón acted in dozens of movies and television shows over her nearly seven-decade long career. She may be best remembered as Tony Montana's mother in Brian De Palma's 1983 crime drama Scarface, starring alongside Al Pacino. As a recognition of her lifetime commitment to theater and cinema, Colón received the National Medal for the Arts from President Barack Obama in 2014. 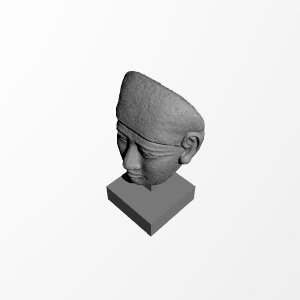