3D
Scan The World
1,677 views 36 downloads
Community Prints Add your picture
Be the first to share a picture of this printed object
0 comments

The conquest of Egypt and its incorporation into the Roman empire inaugurated a new fascination with its ancient culture. Obelisks and Egyptian-style architecture and sculpture were installed in Roman fora. The cult of Isis, the Egyptian mother goddess, had an immense impact throughout the empire. Likewise, changes were noticeable in Egyptian artistic and religious forms, as Egyptian gods were increasingly represented in classicizing style. Egyptian funerary arts evolved in a new and creative direction: traditional idealized images gave way to ones accessorized with contemporary Greco-Roman coiffures and dress as influenced by fashions of the imperial court at Rome, and even panel portraits were painted in the illusionistic Greco-Roman style.

This statue was part of the Antiquities sales at Christie's London on the 5th of July 2017. 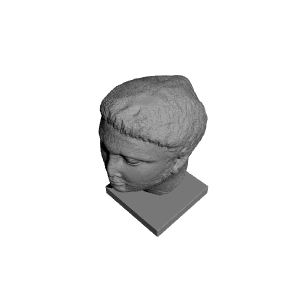