3D
Scan The World
4,416 views 314 downloads
2 collections
Community Prints Add your picture
Be the first to share a picture of this printed object
0 comments

This Egyptian standing male figure is said to originate from Giza. It is from the Late Period, early 26th Dynasty (664-610 BC), it is made from Limestone with traces of paint.

This statue was made as a grave marker for the Egyptian pirest Tjayasetimu. It was carved in the seventh century BC, but follows a type the Egyptians had already used in the Old Kingdom, nearly two thousand years before. Tjayasetimu is draped in a loincloth. He is represented in a strictly frontal stance, his arms by his side and his fists clenched. His left leg is advanced.

Hieroglyphic inscriptions on the plint, back pilaster and belt contain religious invocations and give Tjayasetimu's titles. He was a priest in charge of the statues of Psamtek, the Dual King (Pharao) known to the Greeks as Psammetichos. 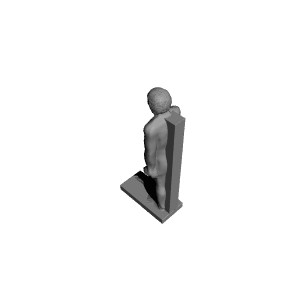 ×
2 collections where you can find Egyptian Standing Male Figure at The British Museum, London by Scan The World