3D
Scan The World
1,680 views 65 downloads
1 collection
Community Prints Add your picture
Be the first to share a picture of this printed object
0 comments

Egyptian-style statues of worshippers were dedicated in sanctuaries from around 600 BC, including some on a large scale. Once interpreted as evidence of Egyptian political domination, they are not believed to reflect Phoenician cultural and religious influences on Cyprus. Terracotta examples are also known, but the prototypes may have been made of wood and other perishable materials.

The head would have had a similar body to a kouros, such as the Cesnola Collection's Egyptian worshipper or priest at The Metropolitan Museum of Art, New York.

From Dali, Sanctuary of Apollo-Reshef

A lot of support to deal with. My settings in simplify3D: Support infill % = 45%; Upper and lower vertical separation: 1 layer. 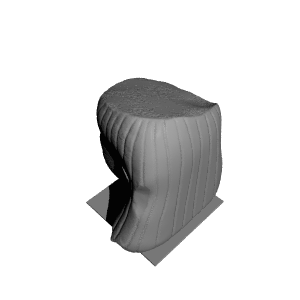