3D
Scan The World
2,461 views 123 downloads
1 collection
Community Prints Add your picture
Be the first to share a picture of this printed object
0 comments

Between 1929 and 1939 the German archaeological expedition in Hermopolis unearthed more than 1200 Amarna-period talatat blocks. Dating from the reign of Akhenaten, they were originally made for the temples of Tell el-Amarna and later re-used as construction material in buildings of Ramesses II in the downriver town of Hermopolis. When publishing the reliefs in 1969, Roeder found around 300 additional talatat fragments in American private collections that were added to the main corpus, this relief being one of them.

The reign of Akhenaten marks an important break in Egyptian history as the pharaoh introduced a radical programme of religious and artistic reformation. At the death of his father Amenhotep III, he changed his name to Akhenaten and moved the capital to the new city of Akhetaten, modern Tell el-Amarna. He ruled from there together with his wife, Queen Nefertiti. The aim of his reform was to substitute the traditional polytheism for a new monotheistic cult centred around the deified sun disc, Aten.

This relief reflects the new ideas introduced by Akhenaten by presenting his new name, which included the name of the new god Aten, together with a probable reference to his queen Nefertiti. The talatat-stone format was itself an innovation introduced by Akhenaten, probably in order to speed his construction works. It was a standardised stone measuring 52 by 26 by 24 centimetres, small enough for a single worker to carry.

Scanned at the Antiquities Bonhams Sale of the 6th of July 2017. 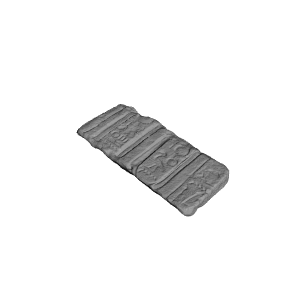