3D
Scan The World
7,141 views 561 downloads
3 collections
Community Prints Add your picture
Be the first to share a picture of this printed object
0 comments

Eirene (Goddess of Peace) with Ploutus (God of Wealth) on her arm, 374 A.D., acquired 1894/1895, The Royal Cast Collection (Copenhagen, Denmark). Made with Memento Beta (now Remake) from Autodesk.

Eirene more commonly known in English as Peace, was one of the Horae, the personification of peace. She was depicted in art as a beautiful young woman carrying a cornucopia, sceptre, and a torch or rhyton. She is said sometimes to be the daughter of Zeus and Themis. Her Roman equivalent was Pax. Plutus was the god of wealth in ancient Greek religion and myth. He was the son of Demeter and Iasion, with whom she lay in a thrice-ploughed field. In the theology of the Eleusinian Mysteries he was regarded as the “Divine Child.” His relation to the classical ruler of the underworld Pluto, with whom he is often conflated, is complex, as Pluto was also a god of wealth and money.(Wikipedia)

As restored from copies, this statue showed Eirene, the personification of peace, standing nearly frontal, with her weight on her left leg, and her right leg relaxed. She wore a peplos, a himation draped over both shoulders (seemingly attached where peplos was fastened), long hair, some rolled around a taenia, with an ampyx (hairband) revealing itself at the front, earrings (made from metal?), and thick-soled sandals. She turned her head in a 3/4-view, tilted down, to look at the baby Ploutos, personification of wealth, cradled in her left arm, along with a keras (horn of plenty). Ploutos, seated 3/4-view to the left, with legs crossed, wearing a himation draped over his knees, lower legs, and thighs tilted his head in 3/4-back-view to the left, looking up at Eirene, reaching his right arm up to her, and his left arm down at his side.

This statue was probably commissioned to celebrate either a peace made with Sparta in 374 B.C., after Timotheos' victory over the Spartans (also the founding of Eirene's cult in Athens) or the peace of Kallias in 371 B.C. Since an image of the statue is pictured on Panathenaic amphorae of 360/59 B.C. (dated by dipinti naming the archon of that year) it must have been completed by then. 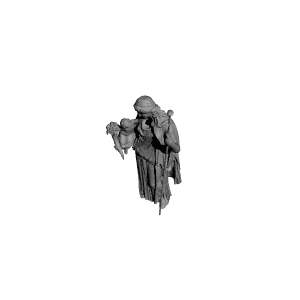 ×
3 collections where you can find Eirene at The Royal Cast Collection, Copenhagen by geoffrey.marchal