Ekamukhalinga at the Guimet Museum, Paris

Ekamukhalinga at the Guimet Museum, Paris

Siva has many manifestations, but is worshipped principally, and primarily, in his linga or phallus form symbolising his primordial power of creation. From the earliest period of the appearance of Siva in the linga form, around the 1st century BCE at Aghapur and Gudimallam, the linga shaft addorsed with Siva in anthropomorphic form was established as the dominant linga-type of the early period. In this representation the head of Siva, with the third eye clearly visible, emerges from the shaft of the linga. Siva is moustached, and wears a rudraksa mala necklace, made from the stones of the fruit of a tree holy to Siva. He wears his uncut hair piled high (jatamakuta) in the style of a yogic ascetic; further locks of hair cascade down behind his ears. A linga of this scale could have been worshipped as the cult image of a Saivite temple, of which few survive intact from the Gupta period. The distinctive pink sandstone suggests that it originated in the region of Mathura.

Representations of a deity emerging from a tree trunk occur in Sunga and Satavahana art of the 1st century BCE, embodying shared concepts of the divine in nature, and of the manifestation of the god-head in anthropomorphic form. The symbolism of the tree-post-pillar as devices linking the (mundane) earth and (heavenly) sky were widespread in early religious thinking in India and may be assumed to have contributed to the pillar, with or without explicit phallic overtones, becoming a central motif. The linga, which literally means "sign", became the most powerful icon of Siva, to which all others are subsidiary. 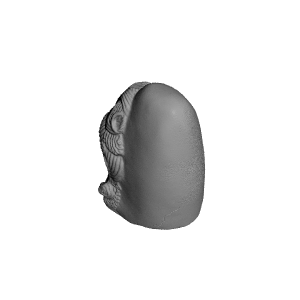 ×
2 collections where you can find Ekamukhalinga at the Guimet Museum, Paris by Scan The World
×
Philippe Maegerman
@PhilippeMaegerman
1
Printed on: Other
Material: Others
Posted at: 02nd December 2021