3D
360°
Featured Scan The World
1,405 views 222 downloads
1 collection
Community Prints Add your picture
Be the first to share a picture of this printed object
0 comments

Lady Glenorchy was in Rome about 1830 with her husband, Lord Glenorchy, John Campbell. Thorvaldsen produced portrait busts of the married couple, but this bust of Lady Glenorchy cannot be identified with certainty among the preserved plaster busts at Thorvaldsen's Museum. This bust depicted here (A268), has been proposed as a portrait of the British Woman.

The marble version of the bust was located, until 1925, on the Campbell couple's property south-east of Edinburgh in Scotland. Where the marble bust is today is unknown. 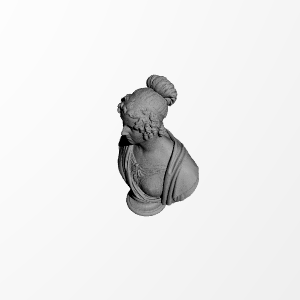 ×
1 collections where you can find Eliza Glenorchy (?) by Thorvaldsen