Queen Elsa of Arendelle (also known as the Snow Queen) is the deuteragonist of Disney's 2013 animated feature film, Frozen. She is the older sister of Princess Anna, and the ruler of Arendelle. Her powers over ice and snow ultimately led her to become the famous Snow Queen. She is voiced by Idina Menzel. Elsa is loosely based on the title character of "The Snow Queen", a fairy tale by Hans Christian Andersen, and to a much lesser extent, Kai from the same story. While the character from the original fairy tale was neutral and, to some degree, villainous, Elsa was rewritten as the deuteragonist.

This was printer at 0.2mm layer height and 10% infill and took only 120 minutes. 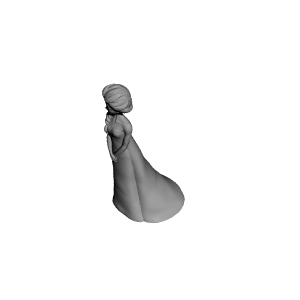 ×
44 collections where you can find Elsa from Disney's Frozen by PPBle
×
Didier Klein
@didierklein
4
Posted at: 28th May 2015

Fast print on the Ultimaker 2 Extended with Ultimaker magenta filament. Love the model! (and my daughter as well) Thanks for sharing!

Thank you for the model. Printed on Prusa i3MK3s. Filament: Polyalchemy Elixir Aquamarine PLA. Support: yes (only under the dress)