3D
1,819 views 22 downloads
Community Prints Add your picture
Be the first to share a picture of this printed object
1 comments

This object was made in Tinkercad. https://www.tinkercad.com/things/7EZSQ5CKVgQ

Ever since I watched the Buddy Games for the first time when I was very young, it has always been my dream to enter the Buddy Games Aircraft Race. I used to always pretend that I was zooming around through the sky, flying faster than all the other racers, flying through that red hoop that is the finish line, and becoming the Buddy of the Year. If I could have one wish, it would be to enter the Aircraft Race. And today, that dream has finally come true.

“I can’t believe it!” I said to my best friend Oliver the Alien. I pushed off the ground with my powerful bunny legs and twirled in the air.

“Me neither,” he replied, smiling. “Though the chances of either of us winning are close to nothing, it will be an amazing experience.”

“But only one of us can win,” Oliver said. I nodded, though I wished both of us could win and be the Buddy of the Year.

We walked to a booth with a sign that read “Aircraft Race Competitor Sign-In.” A smiling, three-eyed alien greeted us.

“Hello there!” the alien grinned. “Are you here to compete in the Buddy Games Aircraft Race?”

“May I have your names please?” The alien pulled out a clipboard.

“Here you are,” the alien muttered, and marked off our names on the clipboard. “Take that path over there and head to the right and you’ll find the aircrafts. Best of luck to both of you, and most of all, remember to have fun!”

“Thank you!” We smiled and headed down the path.

“I can’t believe this is really happening!” I repeated. “Hurry up, Oliver!” I sprinted towards the open field where the aircrafts were lined up. A huge crowd cheered from the grandstand. I felt a chill spread through my body as I waved up at the audience. This was it. I was competing in the Buddy Games Aircraft Race.

“Emmalyn!” Oliver called. I blinked and turned to him.

“My aircraft is over there, so I’m about to head over to it.” He pointed, and I gasped. He was flying a LightningCraft 1060, one of the fastest aircrafts in Buddyland. “And I wanted to tell you good luck before we start.”

“Good luck, and have fun!” I said. A suddenly feeling of fear washed over me as I walked to my FalconCraft 120. If I lost this race, all of Buddyland would see. I looked around at all the new, shining, speedy aircrafts. My old, slightly rusted FalconCraft 120 seemed like nothing compared to the other racers.

“Don’t worry,” I whispered to myself. “There’s still a chance.”

Suddenly my dream seemed silly. How could I possibly have thought I could actually win?

“Because there’s always a chance,” I reassured myself. I began to check the engine of my aircraft and make sure it was ready to race.

“FIVE MINUTES UNTIL THE RACE STARTS!” a loudspeaker boomed. I finished my aircraft test and leapt into the cockpit. My pulse quickened as I gripped the steering levers with my shaking hands.

“AIRCRAFT RACERS, GET READY!” the loudspeaker announced. The crowd cheered. I took a deep, shaky breath, and narrowed my eyes. Three laps through the specified course that went through the city, and then through the red hoop that was the finish line.

I pulled back on the lever in my left hand, and my aircraft rose into the air. Then I pushed hard on the lever in my right, and with a jolt, my aircraft shot forward. I zoomed past a building, and turned sharply to the left. The wind blew in my face, and my ears fluttered behind me. I darted forward, weaving through other racers. Ahead in the lead I could see a smooth, fast, silver aircraft. I pushed the lever forward and swooped down, swerving around a corner, and rising higher into the sky again. There was only a few aircrafts ahead of me. Suddenly I heard the roaring of a motor, and to my left a LightningCraft 1060 began to pass me. It was Oliver. I pushed harder, and swiftly climbed higher. I could see the grandstand not very far away, and hear the cheering of the crowd. I had almost completed the first lap.

I leaned forward more, narrowing my eyes. Only two racers were ahead of me now, as I passed the red hoop and went on to the second lap. I began to gain speed, zigzagging through buildings. I rose and dropped, up then down, left then right. I smiled at the thrill of the race, and passed the red hoop again. I was now on to the final lap. In front of me was only the silver aircraft, with its sleek wings and build. I pushed harder with all my might, and amazingly, magically, I passed it. My jaw dropped as sped forward. Ahead was the red hoop. The crowd began to scream, their cheers reaching the peak. A sudden numbness came into my mind. I was going to win. My dream was going to come true. I was going to be the Buddy of the Year.

The hoop was only about twenty feet away now, when suddenly a little blue aircraft darted in front of me. I stared in shock as it passed through the hoop. The crowd went wild, cheering, throwing confetti. I passed through the finish next, and after me the silver aircraft, then Oliver. I landed my aircraft. Everything seemed distant and faint. Confetti showered down. The loudspeaker boomed. A band began to play. For a moment I felt nothing. And then suddenly, a ball of joy grew within me. I was standing here in front of a huge crowd as they cheered, with confetti raining down and music playing. It didn’t matter that I didn’t win. I had had fun.

Oliver came and hugged me, and then I went over to the racer who had won in their little blue aircraft.

“Congratulations!” I said, and I meant it. The racer turned towards me. She was a young, pink alien.

“Thank you!” she replied, beaming. “You did amazing!”

I thanked her, and so did Oliver, and we stood in front of the celebrating audience. I didn’t win. I didn’t become the Buddy of the Year. But I did have fun. And my dream did come true. 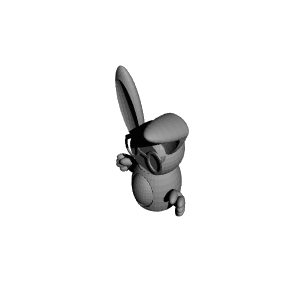