Emperor Constantine the First at the Louvre, Paris, France

3D
Scan The World
4,503 views 417 downloads
2 collections
Community Prints Add your picture
Be the first to share a picture of this printed object
0 comments

Emperor Constantine the First at the Louvre, Paris, France

Constantine the Great (27 February c. 272 AD – 22 May 337 AD), also known as Constantine I or Saint Constantine, was a Roman Emperor from 306 to 337 AD of Thracian-Illyrian ancestry. Constantine was the son of Flavius Valerius Constantius, a Roman army officer, and his consort Helena. His father became Caesar, the deputy emperor in the west in 293 AD. Constantine was sent east, where he rose through the ranks to become a military tribune under the emperors Diocletian and Galerius. In 305, Constantius was raised to the rank of Augustus, senior western emperor, and Constantine was recalled west to campaign under his father in Britannia. Acclaimed as emperor by the army at Eboracum (Modern-day York) after his father's death in 306 AD, Constantine emerged victorious in a series of civil wars against the emperors Maxentius and Licinius to become sole ruler of both west and east by 324 AD. This sculpture of him in on permanent display at the Louvre. 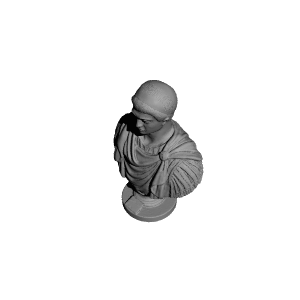 ×
2 collections where you can find Emperor Constantine the First at the Louvre, Paris, France by Scan The World