3D
Scan The World
2,101 views 149 downloads
Community Prints Add your picture
Be the first to share a picture of this printed object
0 comments

In Greek mythology, Narcissus (/nɑːrˈsɪsəs/; Greek: Νάρκισσος, Nárkissos) was a hunter from Thespiae in Boeotia who was known for his beauty. He was the son of the river god Cephissus and nymph Liriope. He was proud, in that he disdained those who loved him. Nemesis noticed this behavior and attracted Narcissus to a pool, where he saw his own reflection in the water and fell in love with it, not realizing it was merely an image. Unable to leave the beauty of his reflection, Narcissus lost his will to live. He stared at his reflection until he died. Narcissus is the origin of the term narcissism, a fixation with oneself and one's physical appearance or public perception. 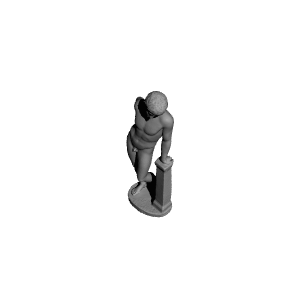