3D
Scan The World
1,479 views 84 downloads
1 collection
Community Prints Add your picture
Be the first to share a picture of this printed object
0 comments

In Greek mythology, Era is one of the Greek Muses. The name would mean "desired" or "lovely", if derived from the same root as Eros, as Apollonius of Rhodes playfully suggested in the invocation to Erato that begins Book III of his Argonautica.

Erato is the Muse of love poetry. In the Orphic hymn to the Muses, it is Erato who charms the sight. Since the Renaissance she has mostly been shown with a wreath of myrtle and roses, holding a lyre, or a small kithara, a musical instrument often associated with Apollo. In Simon Vouet's representations, two turtle-doves are eating seeds at her feet. Other representations may show her holding a golden arrow, reminding one of the "eros", the feeling that she inspires in everybody, and at times she is accompanied by the god Erod, holding a torch. 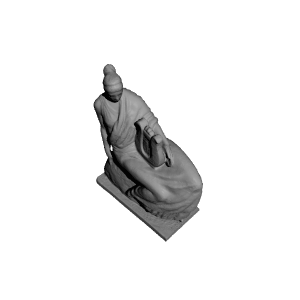 ×
1 collections where you can find Erato by Scan The World