3D
360°
Featured Scan The World
7,550 views 828 downloads
9 collections
Community Prints Add your picture
Be the first to share a picture of this printed object
0 comments

This sculpture, from the Farnese Collection, depicts Eros (Cupid) riding a dolphin. The work was created in the 2nd Century AD adn was used as an ornamental motif on a fountain. The group represents Eros as a winged child, positioned upside down as he rides a dolphin from whose mouth would have spouted water. The impressively complicated composition of the work is highlighted by the spiralling twist of the dolphin's tail around the child's body, oh which only the legs in the highest part remain free.

The motif of Eros riding a dolphin is known in Greek art from the middle of the sixth century BC, especially in ceramics or decorative arts. In ancient and later works where this motif was most common, the image is believed to represent the soul's journey (see ancient Roman sarcophagi), originally associated with Dionysian religion. A mosaic from late Roman Britain shows a procession emerging from the mouth of the sea god Neptune, first dolphins and then sea birds, ascending to Cupid. One interpretation of this allegory is that Neptune represents the soul's origin in the matter from which life was fashioned, with Cupid triumphing as the soul's desired destiny 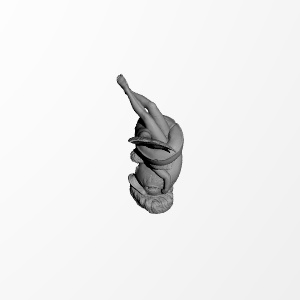