Erythraean Sibyl at The Louvre, Paris

3D
Scan The World
2,379 views 143 downloads
Community Prints Add your picture
Be the first to share a picture of this printed object
0 comments

Erythraean Sibyl at The Louvre, Paris

The work, exhibited in the Salon in 1761, because part of the collections of the great amateurs La Live de Jully and La live de La Briche.

The Erythraean Sibyl was the prophetess of classical antiquity presiding over the Apollonian oracle at Erythrae, a town in Ionia opposite Chios, which was built by Neleus, the son of Codrus.

Presumably there was more than one sibyl at Erythrae. One is recorded as having been named Herophile,. At least one is said to have been from Chaldea, a nation in the southern portion of Babylonia, being the daughter of Berossus who wrote the Chaldean history, and Erymanthe. Apollodorus of Erythrae, however, says that one who was his own countrywoman predicted the Trojan War and prophesied to the Greeks both that Troy would be destroyed and that Homer would write falsehoods.The word Sibyl comes (via Latin) from the ancient Greek word sibylla, meaning prophetess. Sibyls would give answers whose value depended upon good questions - unlike prophets who typically answered with responses indirectly related to questions asked. There were many sibyls in the ancient world, but this oracle prophesied Alexander the Great's divine parentage, according to legend.

In Christian iconography the Erythraean Sibyl sometimes appears as one who prophesied the Redemption. Examples were in mediaeval paintings in Salisbury cathedral, and others are shown in the illustrations on this page.

The word acrostic was first applied to the prophecies of the Erythraean Sibyl, which were written on leaves and arranged so that the initial letters of the leaves always formed a word. 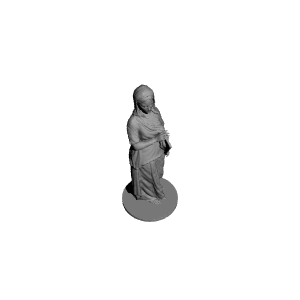 ×
0 collections where you can find Erythraean Sibyl at The Louvre, Paris by Scan The World