3D
Scan The World
2,957 views 274 downloads
2 collections
Community Prints Add your picture
Be the first to share a picture of this printed object
0 comments

Esmeralda, a moulding after a sculpture of Edouard-Charles-Marir Houssin circa 1885. He was born in Douai on 13 September 1847. In 1856 he joined the Academic Schools of Douai, and there received several awards. In 1864 he moved to Paris and joined the private studios of Henri Lemaire of Valenciennes and François Jouffroy of Dijon. In 1866 he was admitted to the sculpture section of the École nationale supérieure des Beaux-Arts in Paris. In 1868 Houssin displayed his first bust to the Society of Friends of the Arts of Douai. From 1871 to 1877 he was professor of sculpture at the Douai Art Schools. He then returned to Paris, where he exhibited regularly at the Salon. His works were rewarded with several awards and medals. Many of his works were purchased by the state, and he received many public commissions. Early in 1894 he was appointed professor of modeling the National Manufacture of Sèvres, a position he held until his death in 1919. 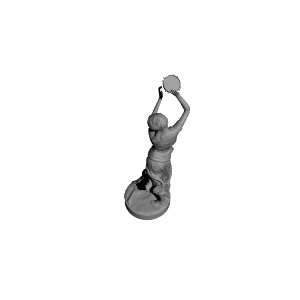 ×
2 collections where you can find Esmeralda in Douai, France by Scan The World