3D
Scan The World
2,668 views 117 downloads
2 collections
Community Prints Add your picture
Be the first to share a picture of this printed object
0 comments

Earlier Etruscan shields are flat and later examples have a slightly convex curve across the body of the shield. The later styles bear a close resemblance to contemporary Greek models. There are several helmet designs found at Etruscan sites, the most distinctively Etruscan being the so-called “crested helm” variety. The crest is fashioned by joining two embossed plates (or laminae) into a high peak pointed crest. The high crest is frequently embossed with decoration. In addition to the Crested Helm, a number of other varieties of helms have been found in Etruscan tombs. Often the design is a semi-spherical cap, with no decoration or with appliques. Another variation to the common semispherical cap is cheek guards attached by hinges. 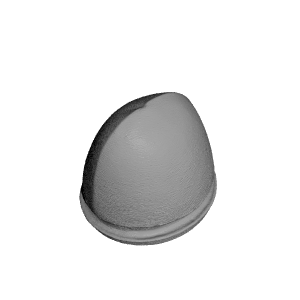