Jean-Pierre Dantan gained fame under the July Monarchy (1830-1848) trhanks to his caricature-like portraits of famous artists. He also pursued a career as a serious portraitist. This medallion. which was undoubtedly inserted into an edifice, is a posthumous portrait of Eugène Porcher de Richebourg, the grandson of the first mayor of La Chatre and count under the First Empire, Gilles Porcher-Duplaix. 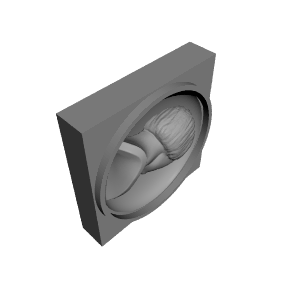