Europe at The Palace of Versailles, France

Europe at The Palace of Versailles, France

This is a large marble sculpture by Pierre Mazeline. Mazeline was a French sculptor, born in Rouen in 1633 and died the 7th February 1708 in Paris. In 1668 he was enrolled at the Royal Academy of Painting and Sculpture, after creating a wall relief or medallion representing St. John the Evangelist. In his later years he focused his attention on the Garden of Versailles. He was responsible for many of the sculptures in the park and gardens around the Palace of Versailles. He was part of the team of sculptors led by Charles Le Brun, the first painter to the king, to compose the layout of the field.

This piece is part of a series of sculptures personifying a continent. It is commonly found in countries (France, Liberty and Marianne for example) and continents (See The Albert Memorial in London on Scan the World for more information) and depicted by a woman. This one in particular depicts 'Europe', representing a woman holding a shield with a lion relief and a helmet familiar with champions or Athena; looking towards the horizon the ideologies of bravery and military prowess are highlighted. The European crops are shown at the back of the statue: artichoke, squash, corn and grapes. 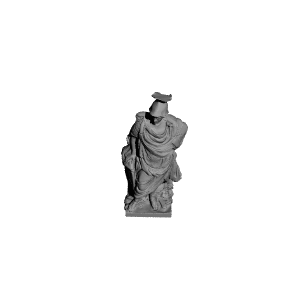 ×
2 collections where you can find Europe at The Palace of Versailles, France by Scan The World
×
Angel Spy
@Angel Spy
1
Printed on: Prusa i3 MK2 Kit
Material: PLA
Posted at: 13th May 2021
Loading comments...