3D
Scan The World
4,043 views 406 downloads
1 collection
Community Prints Add your picture
Be the first to share a picture of this printed object
0 comments

The Albert Memorial is situated in Kensington Gardens,London, directly to the north of the Royal Albert Hall. It was commissioned by Queen Victoria in memory of her beloved husband, Prince Albert who died of typhoid in 1861. The memorial was designed by Sir George Gilbert Scott in theGothic Revival style. Opened in July 1872 by Queen Victoria, with the statue of Albert ceremonially "seated" in 1875, the memorial consists of an ornate canopy or pavilion, in the style of a Gothic ciborium over the high altar of a church, containing a statue of the prince facing south. The memorial is 176 feet (54 m) tall, took over ten years to complete, and cost £120,000 (the equivalent of about £10,000,000 in 2010). The cost was met by public subscription.

At the corners of the central area, and at the corners of the outer area, there are two allegorical sculpture programs: four groups depicting Victorian industrial arts and sciences (agriculture, commerce, engineering andmanufacturing), and four more groups representing Europe, Asia, Africa and The Americas at the four corners, each continent-group including several ethnographic figures and a large animal. (A camel for Africa, a bison for the Americas, an elephant for Asia and a bull for Europe.)

The model had to be rotated 90 degrees to print and requires supports. On of the corner figure's right arm did not print because it is too fragile and at a very steep angle but other than that the print came out very well. 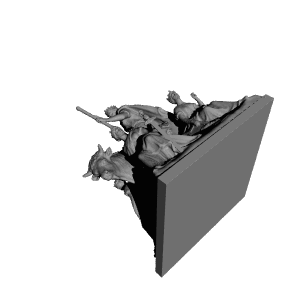 ×
1 collections where you can find Europe Group, part of the Albert memorial in South Kensington, London by Scan The World