Eurydice Dying at The Louvre, Paris

3D
Scan The World
9,778 views 1,509 downloads
4 collections
Community Prints Add your picture
Be the first to share a picture of this printed object
0 comments

Eurydice Dying at The Louvre, Paris

This marble sculpture completed in 1822 depicts the moment Erydice dies after being bitten by a snake, the sculpture was carved by Charles-Francois LeBoeuf. In Greek mythology, Eurydice was an oak nymph or one of the daughters of Apollo (the god of music, who also drove the sun chariot, 'adopting' the power as god of the Sun from the primordial godHelios.) She was the wife of Orpheus, who tried to bring her back from the dead with his enchanting music.

Eurydice was the wife of Orpheus, who loved her dearly; on their wedding day, he played joyful songs as his bride danced through the meadow. One day, Aristaeus saw and pursued Eurydice, who stepped on a viper, was bitten, and died instantly. Distraught, Orpheus played and sang so mournfully that all the nymphs and deities wept and told him to travel to the Underworld to retrieve her, which he gladly did. After his music softened the hearts of Hades andPersephone, his singing so sweet that even the Erinyes wept, he was allowed to take her back to the world of the living. In another version, Orpheus played his lyre to put Cerberus, the guardian of Hades, to sleep, after which Eurydice was allowed to return with Orpheus to the world of the living. Either way, the condition was attached that he must walk in front of her and not look back until both had reached the upper world. Soon he began to doubt that she was there, and that Hades had deceived him. Just as he reached the portals of Hadesand daylight, he turned around to gaze on her face, and because Eurydice had not yet crossed the threshold, she vanished back into the Underworld. When Orpheus later was killed by the Maenads at the orders of Dionysus, his soul ended up in the Underworld where he was reunited with Eurydice.

The story in this form belongs to the time of Virgil, who first introduces the name of Aristaeus and the tragic outcome. Other ancient writers, however, speak of Orpheus' visit to the underworld in a more negative light; according to Phaedrus in Plato's Symposium, the infernal deities only "presented an apparition" of Eurydice to him. Ovid says that Eurydice's death was not caused by fleeing from Aristaeus, but by dancing with naiads on her wedding day. In fact, Plato's representation of Orpheus is that of a coward; instead of choosing to die in order to be with the one he loved, he mocked the deities by trying to go to Hades to get her back alive. Since his love was not "true" — meaning he was not willing to die for it — he was punished by the deities, first by giving him only the apparition of his former wife in the underworld and then by being killed by women. 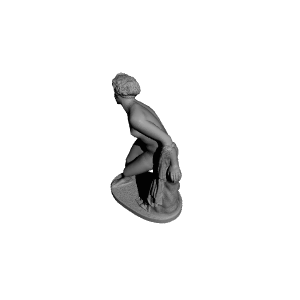 ×
4 collections where you can find Eurydice Dying at The Louvre, Paris by Scan The World