3D
Scan The World
4,676 views 524 downloads
4 collections
Community Prints Add your picture
Be the first to share a picture of this printed object
0 comments

Eve is a figure in the Book of Genesis in the Hebrew Bible. According to the creation myth of the Abrahamic religions, she was the first woman. In Islamic tradition, Eve is known as Adam's wife and the first woman although she is not specifically named in the Quran.

According to the second chapter of Genesis, Eve was created by God (Yahweh) by taking her from the rib of Adam, to be Adam's companion. She succumbs to the serpent's temptation to eat the forbidden fruit from the tree of the knowledge of good and evil. She shares the fruit with Adam, and as a result the first humans are expelled from the Garden of Eden. Christian churches differ on how they view both Adam and Eve's disobedience to God (often called the fall of man), and to the consequences that those actions had on the rest of humanity. Christian and Jewish teachings sometimes hold Adam (the first man) and Eve to a different level of responsibility for the fall, although Islamicteaching holds both equally responsible.

Although Eve is not a saint's name, the traditional name day of Adam and Eve has been celebrated on December 24 since the Middle Ages in many European countries such as Germany, Hungary, Scandinavia, Estonia, and Lithuania. 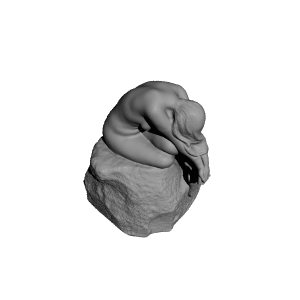 ×
4 collections where you can find Eve by Scan The World