From 1900 onwards Rodin frequently received commissions for portrait busts of men and women who were prominent in political and artistic circles. This portrait was commissioned by Ernest Beckett, later Lord Grimthorpe, who had been introduced to Rodin by the British sculptor John Tweed and who became one of Rodin's earliest admirers in Britain. Eve Fairfax (1871-1978) was briefly engaged to Beckett and she sat for Rodin several times during the period 1901-9.

Their meetings and correspondence brought Rodin to a closer, more personal knowledge of his sitter. He admired her cool Englishness and what lay beneath her calm exterior, describing her as 'A Diana and a satyr in one'. He also said, referring to her, 'How flat chested they are. Oh, those planes and the bony structure of these English women.'
This bronze appears to have been cast from a clay or plaster study. The marble version given to Eve Fairfax by Rodin is now in the Johannesburg Art Gallery, South Africa. 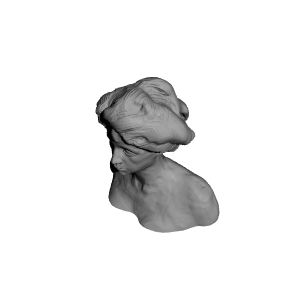 To my eyes, there is a mystery in the depiction of the portrait. From my Rodin collection of prints. I always wondered how sculpts would look like if painted. This started when I was told that the sculpts in the metope of Parthenon where painted and what remains today is the decoloured marble after many ages.