3D
7,374 views 98 downloads
2 collections
Community Prints Add your picture
Be the first to share a picture of this printed object
1 comments

Tardigrades (also known as waterbears or moss piglets) are water-dwelling, segmented micro-animals, with eight legs.Tardigrades are classified as extremophiles, organisms that can thrive in a physically or geochemically extreme condition that would be detrimental to most life on Earth. For example, tardigrades can withstand temperatures from just above absolute zero to well above the boiling point of water, pressures about six times greater than those found in the deepest ocean trenches, ionizing radiation at doses hundreds of times higher than the lethal dose for a human, and the vacuum of outer space. They can go without food or water for more than 10 years, drying out to the point where they are 3% or less water, only to rehydrate, forage, and reproduce.

Usually, tardigrades are about 0.5 mm (0.020 in) long when they are fully grown. They are short and plump with four pairs of legs, each with four to eight claws also known as "disks". The animals are prevalent in mosses and lichens and feed on plant cells, algae, and small invertebrates. When collected, they may be viewed under a very-low-power microscope, making them accessible to students and amateur scientists 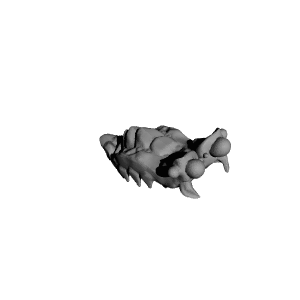 ×
2 collections where you can find evil tardigrade by yvowaldmeier