Change the 3D printer to another machine is not a new topic. I have added a new function to it as a 2D plotter. When I add a multi-pen plotter to it, I found the head is not stable since the connector to the plotter is weak. Now I modify the connector to an independent cover. It is very strong since several screws are used to fix the cover. It is like an exoskeleton of the 3D printer. It is easy to use and not interfere with the original 3D printer function. It is well prepared for further experiments. I first try the multi-pen plotter, it works very well. Next time I will try drag knife and other CNC stuff.

The size of the exoskeleton is about 70*40 mm. It has several screws to fix the other stuff that the distance is 20 mm. M3 screws are used for them.

I have also uploaded the f3d format file. You can adjust it for your printer size. Now it works for me, AnyCubic i3 Mega. 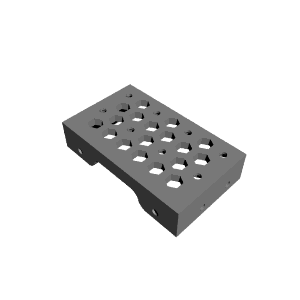