3D
6,452 views 556 downloads
4 collections
Community Prints Add your picture
Be the first to share a picture of this printed object
0 comments

"The Guild Seal is used by several characters in Fable. The Hero of Oakvale has one to communicate with the Guildmaster and to use the Cullis Gates. Briar Rose, Thunder and other Heroes constantly use it to teleport from one place to another. Scythe also used one, but not much is known what he used it for. It is known that he destroyed his when he travelled to the Northern Wastes. The reason for this is so that he wouldn't activate the Cullis Gates, thus preventing the traitorous Maze from following him"

I'm a huge fan of the Fable series and have always wanted to have my own Guild Seal. I cross referenced a few different photos to blend aspects of the different games into one seal. I plan on revisiting this project to update and make a seal that can connect together to have the seal on both sides. 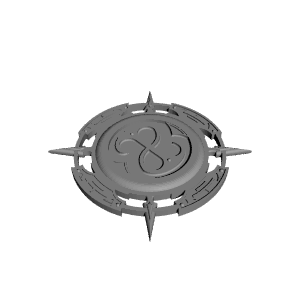