Face from a colossal sphinx

Face from a colossal sphinx

This enigmatic carved stone face probably belonged to a sphinx that formed part of a column base. Like the Assyrian human-headed winged lions and bulls, sphinxes were thought to have protective magical powers. King Sennacherib records how he made sphinxes of alabaster and copper. They were used in the inner rooms of the palace to support wooden columns inlaid with precious metals.

Scanned at the I Am Ashubapinal exhibition at The British Museum, 2019

"Sphinxes of alabaster, as well as sphinxes of cast copper overlaid with silver ... I erected over them columns of ebony, cypress, cedar, juniper and Indian wood, with gold and silver inlays." 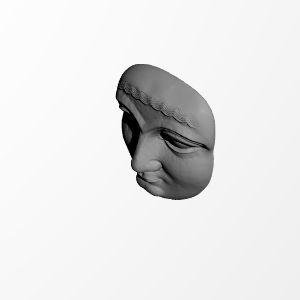 ×
4 collections where you can find Face from a colossal sphinx by Scan The World
×
ramast
@ramast
0
Printed on: Creality CR-10S Pro
Material: PLA
Posted at: 12th May 2020

He is also protecting my garden