3D
Scan The World
1,941 views 87 downloads
1 collection
Community Prints Add your picture
Be the first to share a picture of this printed object
0 comments

This large bronze sculpture is the Queen Alexandra Memorial in Saint James's Park.

It's sculptor, Sir Alfred Gilbert, was commissioned to make the tomb of the Duke of Clarence in Windsor castle. He failed to do so and was disgraced and exiled from Britain in 1901. Queen Alexandra (the Duke's mother, Princess Alexandra at the time) was apparently the only member of the family who supported him afterwards, and in her older age expressed the wish to have him execute her memorial piece. Gilbert eventually returned to the country, finished his original commission and was offered to create this sculpture afterwards, a year after the Queen died.

"Central Group—represents "Love Enthroned", supported by Faith and Hope, on either side, and Love is directing a Boy sent out across the "River of Life", which springs from beneath Her Throne—symbolizing Queen Alexandra's charity to Children, also the water typifies Her advent to Great Britain from across the water." - as explained by the sculptor himself in 1927 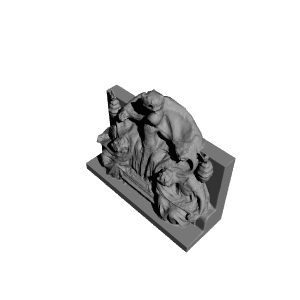 ×
1 collections where you can find Faith, Hope, Love by Scan The World