3D
Scan The World
4,901 views 223 downloads
1 collection
Community Prints Add your picture
Be the first to share a picture of this printed object
0 comments

Athena stands in the center of the pediment. On either side of her a battle rages. With the exception of the archers, one of whom is clothed in Oriental fashion while the other wears a traditional short chiton under cuirass, the warriors are armed but nude. The scene appears to represent the later, famous Trojan War described in detail by Homer. This pediment focuses on the exploits of a second generation of Aeginetan heroes who fought there along with the other Greeks. The principal basis for the identification rests primarily on the Oriental archer, although the overall similarity to the East Pediment provides strong support. The prominence of Athena is unusual but, again as in the East Pediment, clearly an important element of the Aeginetan program. As part of his new reconstruction of the pediments in Munich, Dieter Ohly, whose work forms the basis of any study of this sculpture, has attempted to identify certain of the figures. His suggestions are given here.

Athena appears here in somewhat different form than in the East Pediment. As there, she is present to witness or oversee the battle. In the West Pediment, however, she stands quietly aloof and uninvolved, as if on a different plane. She makes no gesture toward the warriors and signals no individual support. Since she is present on another level, she does not divide the pediment as she does in the east. In fact, the designer has apparently treated the field of the West Pediment quite differently. The two forces appear not to belong principally to the right or left sides of the gable, but to be equally distributed throughout. The two additional warriors, for a total of twelve, make possible a traditional compositional scheme of paired opponents fighting one on one, hence three pairs on each side of Athena. The West Pediment is the earlier of the gables and clearly exhibits the older, more conservative format.

The two pairs of warriors closest to Athena are likely to represent the victorious heroes of the battle. On the Aeginetan side this should be Ajax. Figure W2, on the right of Athena, has no characteristics which permit an identification. To W9 (little remains of the figure) on the left of Athena, however, Ohly assigns a shield. It is one of two which preserve the painted device which originally must have decorated each shield. In this case the device depicts an eagle with a snake. As Ohly notes, Pindar describes the eagle as the sign sent to announce the birth of Ajax, and the origin of his name. Given the direct and contemporary connection of Pindar with Aegina and his evident knowledge of the pediments, the evidence is significant. The shield of his opponent W10 has also survived with paint intact. In this case the device is the forepart of a boar, but not enough is known to connect the image with a hero. If W9 and W10 represent Ajax and his Trojan opponent, W2 and W3 should represent a Trojan and Greek respectively, but specific identifications are not made.

On either side of the Champion warrior pairs are the archers. W11, on the left, wears the long-sleeved, long-legged dress with leather cuirass and hat of an Easterner, as already noted. The style of dress and role as archer together suggest the figure represents Paris. His counterpart W4 on the right should be Teucer, brother of Ajax and renowned archer in the later Trojan campaign. His short chiton and cuirass, contrasted with W11, support his Greek lineage. The archers' opponents, both victims of arrows, lie in the corners. The dying warrior W14 in the left corner is thus Greek; the figure W7 with an arrow in his chest is Trojan. The archers and their victims frame, in each case, a last pair of Greek and Trojan opponents. More specific identifications are not offered. In both cases the warrior nearest the center is the victor, creating an even match on the battlefield.

As on the East, the West Pediment (known as West Pediment 2) was preceded by a slightly earlier pedimental group (West Pediment 1). Unlike East Pediment 1, West Pediment 1 may not have reached completion, for no extra set of geison blocks or extra acroterion has been found. Furthermore, the style and so presumably the date of the two west pediment groups are much closer than are the groups in the east. It may be that West Pediment 1 was still under construction when a decision was made to replace the sculpture. Such fragments as do exist indicate a battle theme. It has been tentatively suggested that the subject of W.P.1 was an Amazonomachy, which would parallel the Late Archaic temple in the city of Aegina nearby. A new and fuller publication by Martha Ohly Dunn of both the earlier groups, together with West Pediment 2, is pending. 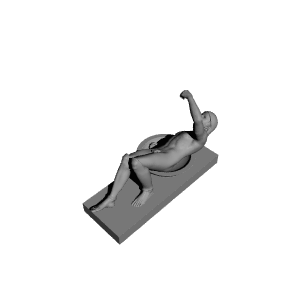