3D
Scan The World
4,726 views 632 downloads
4 collections
Community Prints Add your picture
Be the first to share a picture of this printed object
0 comments

In 1699, Antoine Coysevox received a commission for a group of two equestrian statues destined to exalt the “King’s fame”. The statues were made in Carrara marble in 1701–02 and placed to either side of the upper part of the Bassin de l’Abreuvoir, at the entrance to the park at Marly; on the base, an inscription by the sculptor underlines that the completion of these two monolithic blocks in the space of two years was a tour de force. Mercury, the god of trade and the arts, forms a group with “Fame Mounted on Pegasus” sounding a trumpet.
On one of the shields is an allegory of the accession of Louis XIV’s grandson, the duc d’Anjou, to the throne of Spain.
In 1719, the groups were placed at the west gates to the Tuileries gardens, where they were replaced by casts in 1986. 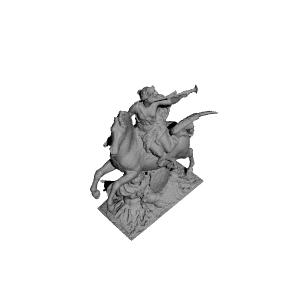