3D
Scan The World
3,490 views 283 downloads
Community Prints Add your picture
Be the first to share a picture of this printed object
0 comments

Family Group (LH 269) is a sculpture by Henry Moore. It was his first large-scale bronze sculpture, and his first large bronze with multiple castings. Made for Barclay School in Stevenage, it evolved from drawings in the 1930s, through a series of models to bronze castings in 1950–51. It also one of the last important sculptures that Moore developed from preliminary drawings: in future, he worked mainly from found objects, maquettes and models.

The sculpture depicts a group of three human figures, a stereotypical nuclear family comprising a man, a woman and a small child. The two adults are sitting on a bench, holding the child between them. The figures are slightly smaller than life size. Three of the five castings from the 1950s are still owned by the original owners, Barclay School, the Tate Gallery, and the Museum of Modern Art in New York. The others are held by the Hakone Open-Air Museum in Japan, and the Norton Simon Museum in Pasadena, with a later version copy at the Henry Moore Foundation in Perry Green, Hertfordshire. 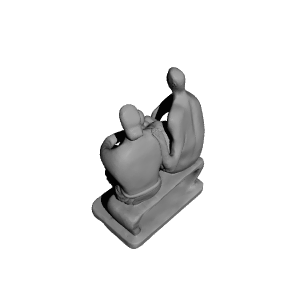