3D
Featured Scan The World
3,722 views 116 downloads
1 collection
Community Prints Add your picture
Be the first to share a picture of this printed object
0 comments

The Birth of Psyche draws upon the ancient Greek myth of Psyche, the human soul personified. The piece has a square structure and forms the ancient symbol of the sun cross. The elements are personified in the four panels; Earth is placed in the lower left corner with his back against basalt columns, is depicted as a sculptor. He carves the female figure out of the stone. Air takes the form of a figure blown up into the top left panel. Fire greets the soul in the top right corner and awakens her with a kiss and water flows onto the scene in the lower right, caressing the newly shaped soul. The movement of the air and water create a revolving motion, which, if sped up forms a cross within a circle.

Thors hammer reversed within a circle was the symbol of creation within theosophy. Einar developed contact with theosophy around 1910 and the theories and ideas of theosophy became the foundation for the main body of his work from that point on. In his notes Einar recalls this work:

"As previously stated this mark of birth as I like to call it I am sure is a stylized fireball made square instead of the rounded sun. The fiery fogs of the universe began their planet creation in that way. The very first instance of the physical world. – The birth of the material as housing for the spirit and its development towards exalted worlds, the birth of the spirit into the material. Because of that from my point of view the turn was from left to right even though the physical was the opposite." 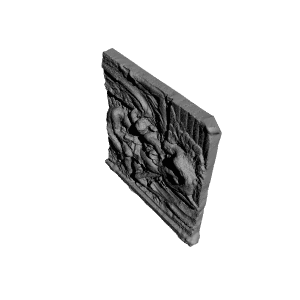