This colossal marble bust was found in Rome near the monastery of San Lorenzo, in the Spolia Christi district, the area where in medieval times it was believed that the Forum of Trajan and, in particular, the Basilica Ulpia were located. Mounted on a moulded base with a concave profile, it portrays Julius Caesar with regular features, curly hair brushed towards his forehead, a particularly robust cranium, two deep horizontal wrinkles on his forehead and a protruding chin. It is part of a series of colossal portraits of the emperors of the first century A.D. as well as the forefathers and leading figures of Republican Rome which were arranged in the Forum of Trajan and the neighbouring Forum of Augustus. The sculpture, which was located at Palazzo Farnese together with the colossal portraits of Vespasian, Tiberius and Antoninus Pius, was intended, according to a design that was never carried out, to decorate the main entrance of the building. 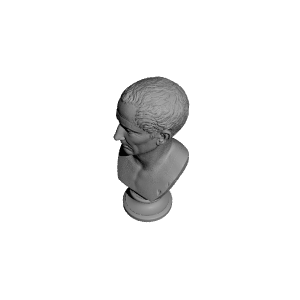