Faun With Infact Bacchus at The British Museum, London

3D
Scan The World
4,931 views 316 downloads
1 collection
Community Prints Add your picture
Be the first to share a picture of this printed object
0 comments

Faun With Infact Bacchus at The British Museum, London

This is a marble statue of a dancing Faun with the infant Bacchus, also known as Dionysus. Dionysus is the god of the grape harvest, winemaking and wine, of ritual madness, fertility, theatre and religious ecstasy in Greek mythology. Alcohol, especiallywine, played an important role in Greek culture with Dionysus being an important reason for this life style. His name, thought to be a theonymin Linear B tablets as di-wo-nu-so, shows that he may have been worshipped as early as c. 1500–1100 BC by Mycenean Greeks; other traces of the Dionysian-type cult have been found in ancient Minoan Crete. His origins are uncertain, and his cults took many forms; some are described by ancient sources as Thracian, others as Greek. In some cults, he arrives from the east, as an Asiatic foreigner; in others, from Ethiopia in the South. He is a god of epiphany, "the god that comes", and his "foreignness" as an arriving outsider-god may be inherent and essential to his cults. He is a major, popular figure of Greek mythology and religion, and is included in some lists of thetwelve Olympians. Dionysus was the last god to be accepted into Mt. Olympus. He was the youngest and the only one to have a mortal mother. His festivals were the driving force behind the development of Greek theatre. He is an example of a dying god. 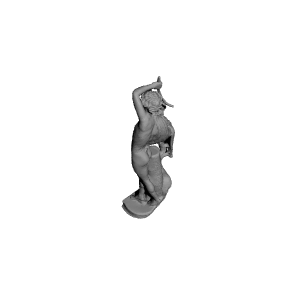 ×
1 collections where you can find Faun With Infact Bacchus at The British Museum, London by Scan The World