3D
360°
Scan The World
1,798 views 77 downloads
Community Prints Add your picture
Be the first to share a picture of this printed object
0 comments

Faustina the Elder (also known as Faustina I, AD 100-140) was a Roman empress alongside her husband, emperor Antoninus Pius. As empress, Faustina was well respected and renowned for her beauty and wisdom. Throughout her life, as a private citizen and as empress, she was involved in assisting charities for the poor and sponsoring and assisting in the education of Roman children, particularly girls. Her typical haristyle, braids pulled back into a bun, became fashion in the empire for several decades.

This portrait of her is set in a modern alabaster bust. 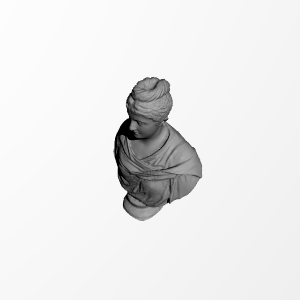