3D
Scan The World
2,801 views 107 downloads
Community Prints Add your picture
Be the first to share a picture of this printed object
0 comments

Born at Pigna, in what is now Liguria, Fea studied law in Rome, receiving the degree of doctor of laws from the university of La Sapienza, but archaeology gradually attracted his attention, and with the view of obtaining better opportunities for his research in 1798 he took orders. For political reasons he was forced to take refuge in Florence; on his return to Rome in 1799 he was imprisoned as a Jacobin by the Neapolitans, who at that time were occupying Rome, but was shortly afterwards freed and appointed Commissario delle Antichità and librarian to Prince Chigi. At Rome in 1781 Fea discovered a statue of a discus thrower, the so-called"Discobolus" (also on Scan the World), one of the known Roman copies of the famous Greek original statue in bronze created by Myron.

Fea helped frame legislation to control the trade in, and excavation of, the antiquities of Rome, and undertook archaeological work on thePantheon and the Forum there.

Fea revised and annotated an Italian translation of Johann Joachim Winckelmann's Geschichte der Kunst, and also annotated some of the works of Giovanni Ludovico Bianconi. Among his original writings he is best known for: Miscellanea filologica, critica, e antiquaria; and Descrizione di Roma Antica e Moderna.

Nice Simple print. Used supports for best finish, but will work without. 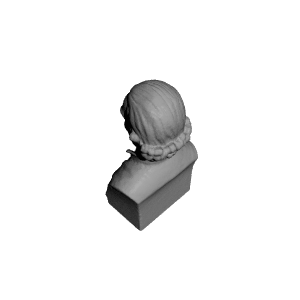 ×
0 collections where you can find Fea Carlo at The Borghese Garden, Italy by Scan The World