Fearless Girl is a bronze sculpture by Kristen Visbal, commissioned by State Street Global Advisors. The girl is facing the Charging Bull, a massive well-known symbol of Wall Street New York, creating a nice juxtaposition between the sculptures. State Street Global Advisors (SSgA) commissioned the piece to promote gender-diverse companies that have a relatively high percentage of women among their senior leadership. The plaque below the statue states: "Know the power of women in leadership. SHE makes a difference," with "SHE" being both a descriptive pronoun and the fund's NASDAQ ticker symbol.

Fearless girl has been criticised by both the author of the Bull and certain feminist groups, stating that the girl destroys the idea of the original piece and uses "corporate feminism". 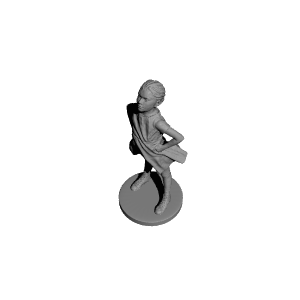 Printed at 135% scale to fill the max height of my printer. .2mm layer height, 20% infill. sprayed with metallic spray paint and finished with clear acrylic sealer

Thank you for the STL file. We featured this model in our blog and a YouTube video:3dwithus.com/3d-printed-wall-street-charging-bull-fearless-girl-juxtaposition youtu.be/CoMthtYMl-A

Next to the BBQ to give it a sense of scale. 750mm tall