Feet from the statue of a kouros

3D
Scan The World
1,382 views 56 downloads
Community Prints Add your picture
Be the first to share a picture of this printed object
0 comments

Feet from the statue of a kouros

A kouros is the modern term given to free-standing ancient Greek sculptures which first appear in the Archaic period in Greece and represent nude male youths. In Ancient Greek kouros means "youth, boy, especially of noble rank". The term kouros was first proposed for what were previously thought to be depictions of Apollo by V. I. Leonardos in 1895 in relation to the youth from Keratea, and adopted by Henri Lechat as a generic term for the standing male figure in 1904. Such statues are found across the Greek-speaking world; the preponderance of these were found in sanctuaries of Apollo with more than one hundred from the sanctuary of Apollo Ptoios, Boeotia, alone. These free-standing sculptures were typically marble, but the form is also rendered in limestone, wood, bronze, ivory and terracotta. They are typically life-sized, though early colossal examples are up to 3 meters tall. 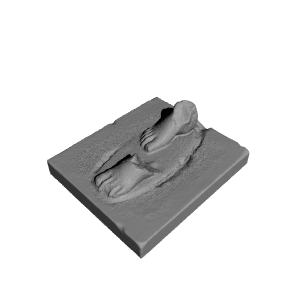