3D
360°
Scan The World
4,289 views 821 downloads
7 collections
Community Prints Add your picture
Be the first to share a picture of this printed object
0 comments

Felix Edmundovich Dzerzhinsky (1877-1926), nicknamed Iron Felix, was a Bolshevik revolutionary and official. From 1917 until his death in 1926, Dzerzhinsky led the first two Soviet state security organizations, the Cheka and the OGPU, establishing a secret police for the post-revolutionary Soviet government. He was one of the architects of the mass killings of hundreds of thousands of people during the Red Terror and Decossackization.

A 15-ton iron monument of Dzerzhinsky, which once dominated the Lubyanka Square in Moscow, near the KGB headquarters, also became known as "Iron Felix". Sculpted in 1958 by Yevgeny Vuchetich, it served as a Moscow landmark during late Soviet times and remains controversial, it is currently getting restored as an object of cultural heritage.
This statue, a much smaller memorial to the man, is standing in St Petersburg and was opened in 1981. 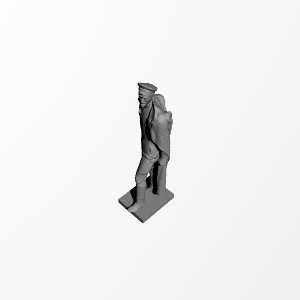