3D
Scan The World
3,362 views 121 downloads
Community Prints Add your picture
Be the first to share a picture of this printed object
0 comments

This fragment of a sculpture depicts a female deity, probably durga. This powerful representation was clearly a primary devotional icon, as is evident from the scale of the sculpture as well as its formal frontal stance. The figure's deified status is confirmed by indications that she once had multiple arms. She is likely a representation of the goddess Durga in her role as the slayer of the buffalo demon. In this context, she can be understood as Shiva's active female manifestation, or shakti, who rids the world of evil forces. The subtle volumetric articulation of the figure and the low-relief drapery typify the Prasat Andet style. 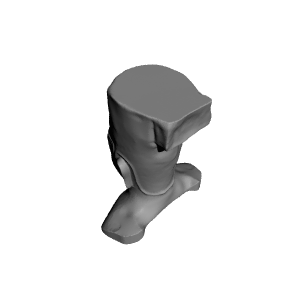